Over the last week or so there has been a lot of backlash against titles like this including Michael Kovis’ What Your ‘X Taught Me About Y’ Post Actually Taught Me and Richard Falconer’s What [insert random topic] Taught Me about SEO, but please give me the benefit of the doubt.

While their rants are justified as unfortunately these types of posts are usually full of nothing useful, the idea of relating SEO to something more relatable triggered something in me after watching the new trailer for the horror film, The Collectors.

This is the one thing that horror movies do well.  Horror movie previews always do a good job of selling their product.  However, more times than not the actual movie ends up disappointing us.  The only other thing I can think of that usually disappoints me more is Taco Bell.  It always looks so good, but that decision always ‘backfires’ about 15 minutes later.

Which got me thinking about those ‘What X Taught Me About SEO’ posts and how they can be so tempting.  Like movie trailers, these titles can be intriguing especially to those not in the field.  It’s what most of us have a hard time doing, trying to convey what SEO is in a way that others outside the industry can understand — even though the term SEO is now in question between our own kind (check out Gaz Copeland’s post on Google+).

Alas though, just like their horror movie counterparts, these ‘relatable’ posts more often than not, turn into corny, cheesy, I cant believe I just wasted my time pieces of garbage without even a nude scene.

Which is disappointing.  It makes us second guess ourselves and question to ever read one again, even though we can see the potential.  Authors can even question themselves on the topic for lack of readership (myself excluded cause no one really reads my stuff anyways haha). It’s what George A. Romero must think about the horror genre nowadays.

It’s just like anything in SEO,  it all started with a good idea and others run with it and abuse it till it becomes taboo.  Michael pointed out some excellent examples, Gaz’s being my favorite, ‘How Fatherhood Made Me a Better Linkbuilder‘. 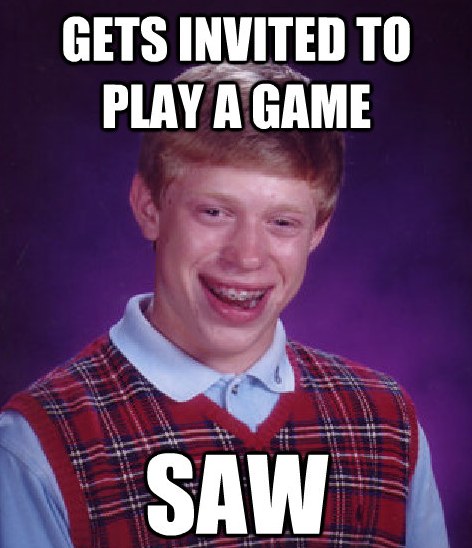 Just like the Saw franchise.  The first one was great in my opinion.  The plot is above and beyond other movies of its genre.  It actually had a storyline that went passed your typical football jock, cheerleader, nerd and black guy go on spring break only to run into a serial killer who has no motivation to kill them other than hes just crazy (and you’ll never guess who dies first).

Then they made a sequel, completed a trilogy and made four more after that.  It was the same thing over and over again.  The gore went up while the storyline suffered.

But I digress.  When we click on these posts, we are expecting to learn or be entertained, not just another SEO tactic that goes one step above a spun article (however I’m sure if you spun most of these posts they would still work, they’re like MadLibs).

Even a couple titles from Rich’s list could make for comedic gold to the right author,

(sorry, no links…Rich already linked to them, I think that’s plenty)

Soon there will be shitbound.org, which will be like the SEO’s version of Scary Movie — hopefully better though cause those movies sucked too — where others can critique and discuss the careless work of others.  They’ll laugh, whine and bitch.  Question how these people even have a job, however it is what it is.  The Internet is free game and there are other things in the world that are just as questionable like how could they end The Sopranos like that, 2 Girls 1 Cup, and Kim Kardashian being rich and famous.