this is the second part to Evolution of an SEO – One Year in Internet Marketing.  Im terrible with introductions so I decided to say fuck it and just jump right back into it, so if you missed the first part and want to read about my dumb mistakes you can check it out here.

The evolution of my guest blogging efforts could be a post in its own right.  It was actually Rand’s Whiteboard Friday video Guest Blogging Strategies was the thing that introduced me to the subject.  This actually made sense.  I had already learned my lesson on the darker side of SEO and was trying to make my way to the light.

This is something I could get behind.  I wasn’t too knowledgeable about SEO, Internet Marketing or even my own industry just yet, but the same thing applied when I was in college.  My writing could usually cover up any lack of actual substance, at least for the time being until I was fully up to speed.

Finding a blog that solely touched on the power of promotional products doesn’t exist, or at least I haven’t found it yet. However, we pride ourselves on being a full service promotional marketing company, which could get me in the door of some of these advertising/marketing blogs and could still be loosely relevant content in the fictional eyes of Google.

Surprisingly I had no trouble getting in contact, pitching or even getting my stuff picked up.  Its amazing how nice and personable the community is. Unfortunately, I still wasn’t to keen to the site itself.  One of my earliest posts, Snooki and Omar Little Are One in the Same When it Comes to Branding, was pretty clever IMO, but was really wasted on a spammy site.

It wasn’t till I started taking a closer look at the sites themselves and getting picky with who I was pitching to that we started to see real movement in the search results.  I love Chrome and their extensions.  The combination of SEO Site Tools, Mozbar and the naked eye can give you a really good idea of a specific site’s worth.

People always talk about how link bait, if done right, could be the ticket to a plethora of links of unimaginable numbers.  It’s also what Wil Reynolds has coined ‘Real Company Shit’.  While his personal piece of link bait isn’t something I would call revolutionary or even that special, the numbers don’t lie.  With 10,000 Facebook likes and over 7,000 tweets, its something that’s definitely worth a shot.

My first real link bait idea was very good in theory.  I spent a lot of time working with Adobe Flash.  I even had a job with the Engender Games Group Lab as the Assistant Director creating  interactive education games.  While I wasn’t an expert in Internet Marketing, maybe I could get people who knew what they were talking about to provide content for me if I wowed them with cool graphics and flashy animations.

On top of their great content, I would hope they would want to share their work, which would give me a bigger audience, more traffic all in all resulting in a boat load of links.  I released the first edition of Are You Smarter Than the Industry’s Best in October with a second edition in November.  Two of my three predictions came true.  The experts were awesome and gave me some great material and were excited to share the game with their followers.  We definitely saw a boost in traffic (crashing the site periodically) although there were no real links that came out of it (yet, I will continue to put out new versions).  What I built was…

My link bait idea was the first time I saw the business side of social media.  I activated my Twitter account for the first time since college.  I was never a big fan of it.  I only used it sparingly to follow my favorite Chicago sports writers and keep up on the rumor mill during the trade deadline (I’m still waiting for the Bulls to get DRose some GD help!).

I made a list of SEOs that I liked.  From there I looked to see who they were interacting with.  If they shared something that someone else had wrote I would read it to see if I agreed or thought it was helpful.  My list grew big enough that I had a diverse group and was still able to keep a close eye on each and every one of their conversations (sounds creepy, I know).

But because I was picky in who I followed as if I were selecting a new blog to pitch, I was able to learn their personalities.  What they did and did not like. What they felt passionate about and more importantly, learn from them, even if I wasn’t interacting with ’em.  It showed a human side to these titans of SEO and made it much easier to approach them.  This is how I got many of the people to participate in my game.

The biggest reality check of the last year has been removing bad links.  It puts in perspective why Google is trying to cut down on spam.  It was an absolute gut shot when I realized how many terrible links our site had.  The outside agencies we had hired in the past really went all out in making it as hard as humanly possible to remove their work.

On top of that, they weren’t the only ones to blame.  I, myself had attributed to the chaos of links.  Days if not weeks now, I have been slowly been removing articles, link submissions, forum posts and comment spam from the web, not because we’ve been hit by a black and white beast, but because I have a guilty conscience about it all.  All in hopes that one day, someone like me will be researching our site for one reason or another and say, “damn they did SEO the right way”.

I’m so excited for the future of Blue Soda Promo.  Hopefully by the first of the year we will have completely revamped site.  These changes are all thanks to the great people who take the time to actually put useful and actionable content on the web.  People like Jonathon Colman and Patrick Hathaway truly do a great job at providing that “great content” thing and being transparent with their writing.

The one great thing about having to do all the salespeople’s bitch work is that I now have a great understanding of the product and why the customer is on the site, what they want and who we should target.  I don’t want to give too much away because I think it could make great material for later posts, so just take a look at the current homepage right now and Ill be back next year to tell you what did and did not work 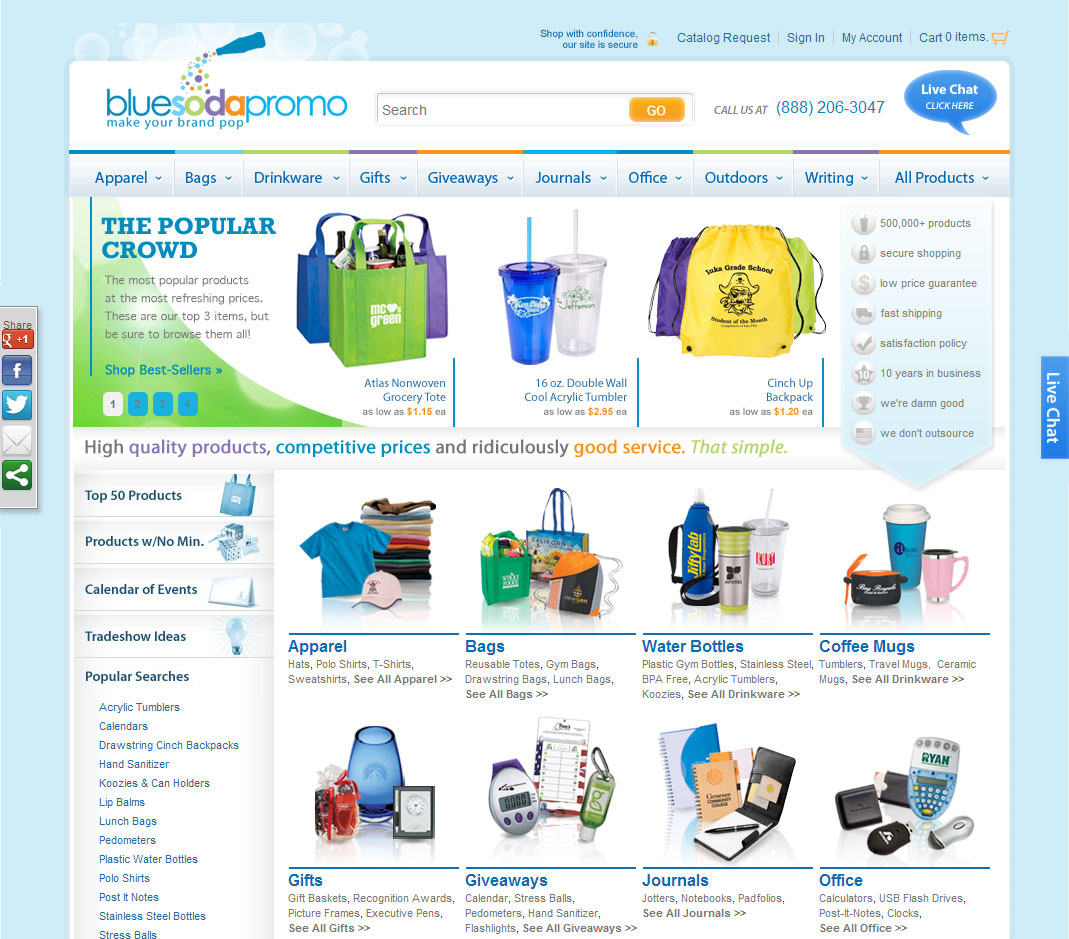